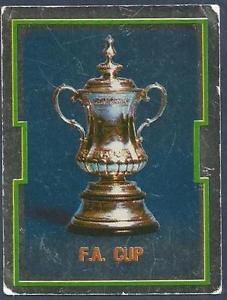 With the FA Cup I will follow the same method as last year. I will simply pick the results and then each round mark of the teams I accurately selected from the previous rounds to show a progressive and cumulative pick. I also ran the teams through my analytics engine to pick the ultimate winner. The machine selected: Spuds. However, the danger in this pick is that the win confidence in the 3rd Round over Leicester is not very high. The secondary pick was Everton; however, they’re likely to be focusing on the Milk Cup and trying to make a push for the Top 4. This leaves the third pick which was strangely Crystal Palace and again I’m not that confident they’ll make it through Round 3.

So based on all the information my pick for winner of the FA Cup is the Crystal Palace.

Before making the pick I should say that I refuse to name the cup by its new sponsor name so that it won’t become the Milk Rumbelows Littlewoods Coca-Cola …. Cup.