On this page you will find all the tables as predicted by each person – all 19 games, all 19 scores for each team.  The”Delta Positions” are how many net positions you are incorrect by… so if, for example, you have Arsenal top that’s two places higher than they actually are so you score +2.   Livi did not participate for the first 5 games so his table is based on the 14 games he has picked.

At the end there is the “average” table – this is a literal average table.  In addition there is the average position error by person per team.

There is clearly a favorite team bias in play when looking at the scores.

Ridiculous Top of the Table Predictions

Generally speaking our predictions are crazy.  Each of the top teams has over 50 points but some have 54 points… that’s 18 wins out of 19!

Ridiculous Bottom of the Table Predictions

The bottom of the table predictions are worse.  Each of the bottom teams is  in single digits!  If you add the total points for Hull City picked by EVERYONE you only have 15!  Some moron has Hull bottom of the table with ZERO points.  Someone actually thinks Hull can’t get even a single point in nineteen games.  JCE, what’s wrong with you?

The average table isn’t too bad but reflects an early belief that Leicester were still Champions quality (+7) and that West Brom (-7) are always underestimated.  Some of the larger gaps are easily explainable: Crystal Palace (+5) are inconsistent and performing worse than expected and Watford (+4) are in a slump.

This is a heat map that shows where and who is picking which team too high or too low with a net average position. 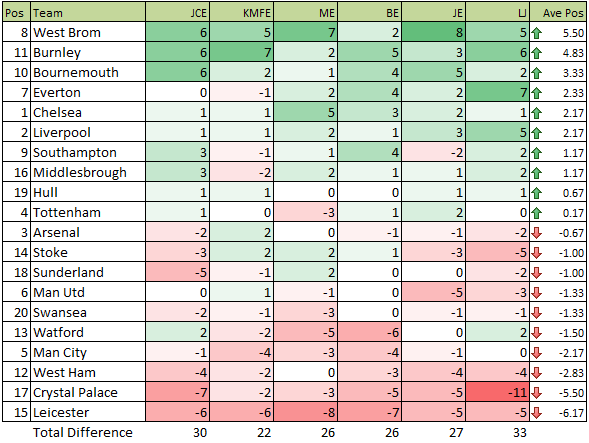