Thought it might be interesting to pick my all Premier League XI (with 5 subs) as I had seen the list put together recently Brendan Rodgers which interestingly didn’t include his “unsigned” Old Aged Midfielder, Steven Gerrard.  I also saw the team of Jamie Carragher who had his selection transcribed by a Scouse translator and was found to have five Manchester United players (and the rumour was he supported Everton?) 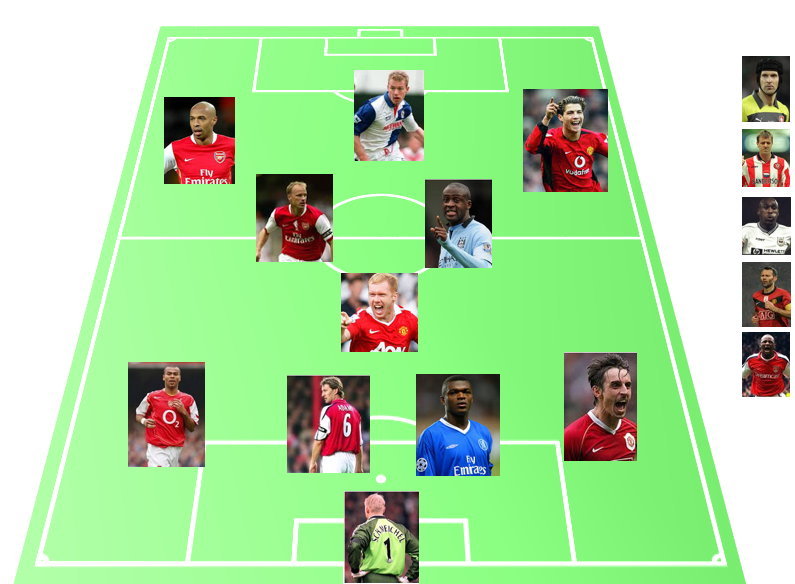 I didn’t expect any one team to dominate my selections but it seems that Arsenal and Manchester United lead the way.   I’ve tried to pick an aggressive 4-3-3 formation (despite everyone’s penchant for a “False Nine” and the current desire for a “Back 3”).  It’s probably closest to Jose Mourinho’s 4-2-1-3 formation because Ya-Ya could step back and cover the back four – but why would we want that?  This back four is more than capable of holding the line and covering the gaps.

It is often debated whether a team of hand selected top drawer players would be superior to a team that plays together on a regular basis but I chose to ignore that so as not to just select the league and Europ winning Manchester United team of 2007-8, the Chelsea team of 2004-5 or the undefeated Arsenal team of 2003-4 (It’s going to be a long time  before we see another undefeated team).

So here are my selections and why – the main rule I held myself to was to select the team and not search or look through premier league lists of players.

A winning team always starts with a great goal-keeper and Schmeichel was simply the best and for a long time.   I didn’t even consider any other keepers as we’re really talking different class.  Tim Flowers had a career season in 1994-5 that probably surpassed any one season but that’s not the consistency deserving of all time eleven.  Schmeichel was also the only keeper that could yell at international center backs and command their attention – he was the defensive leader.   If that wasn’t enough he knew his angles, kept tall longer and bigger than most goalkeepers could hold it and was the fore-runner of the release throw that would set his wide players on the break: the ultimate counter-attacker.

I dislike him immensely but cannot deny his talent.   In his twenties he was the best defender at the position by some margin.  Blessed with amazing recovery speed he was often seen sliding across the turf blocking everything.   Used his pace going forward and able to whip in lethal crosses.   I also considered the current commentator Graeme Le Saux who had similar speed and tremendous crossing ability.

Despite drinking and despite lacking that technical ability, Tony Adams was a dominant player for many years.  Had size, positional sense, and a reach that would cut out balls that were seemingly beyond him.

Marcel had more talent than Adams.   I’ve paired him though because he has equal size and the pair would dominate the middle.

I considered the standard list here: Rio Ferdinand, John Terry(sleeps with Wives and Girlfriends), Jaap Stam (Nandrolone cheat), and others but they didn’t work for me.

Right back was a challenge to try and think of someone that wasn’t Gary Neville.  It’s difficult to ignore a regular England player, regular starter for over a decade on a winning team.  I considered Lee Dixon but his prime years were pre-Premier league… the fact that he played into his late 30’s at the highest level says a lot.

Holding midfielders.  I’ve done it.  I’ve gone with Scholes because I can’t think of anyone else that I would like there more and I’m tired of being told by my brother he’s the best of the best.  Besides that, I need someone who doesn’t seek the limelight and can actually play the role laid out – confident in spreading the ball and competent in covering the space between midfield and defense.

Ya-Ya was the best player on the two Manchester City teams that won the league.   I’m playing him deeper than he would probably like but he’s equally adept forward or back.

Really the player that transformed the Premier League.   Hard to believe that he was a mere 7.5 million pounds or so when Bruce Rioch put him in an Arsenal shirt.  Could score with either foot or with his head and an uncanny ability to always make the right choice with the final ball.  Sheer class.

CR7 was still raw and young when he started at Old Trafford.  He seemed to be obsessed with step-overs and being flash… but the talent was always their, and that pace and athleticism was a cut above everyone.  I know people will be looking out wide for Beckham but I think he’s better off with his marketing guys than on the pitch with these other players.

I’m going to pick Alan Shearer even though I don’t feel tremendously comfortable with him being the best choice for the top eleven and I’m doing it based on his early premier league position of a pure central striker where he really dominated.  His career, particularly with England, was marred by the constant request for him to go out wide and hold the ball.  It seems England liked him facing the wrong way.  In this team with the ability of the wingers and back coming forward a striker with heading ability is a must… as for his feet? One of the fiercest strikers of the ball the league has seen.

Andy Cole would probably score a hathful in this team too.

There are a lot of keepers I like but Peter Cech was probably the best of the left-overs, particularly before the injury years.   Not as good but more consistent than David “Calamity” James.  Van Der Saar was also on the short list.

I really wanted to put Matt in the middle of the starting eleven.   I would definitely substitute him in if there was a penalty shootout.  So much talent.

Count how many are left foot and how many are right foot.  It didn’t matter.  The only player to admit that corners are shooting opportunities.

Was looking for another defender… and Sol is top of the list for me.  Strong, powerful, commanding.  No idea why his England career wasn’t so much more than it was.

Had a gear more than everyone else.

It was close between him and Ya-Ya in picking a midfielder that could hold the back four and power forward.