Here are the previous results:

Bit of an appalling week for yours truly. Looking at it positively, no one had a truly great week with only one person getting more than 50% of the results right (they didn’t win but that’s a trend for BE this year that they’ll be looking to reverse as we enter the run in).

This was a better week for me losing only to KMFE who deserves a good result after weeks of disappointment picking Citeh hoping they would always win.  I originally thought I had won but I incorrectly had 2-0 for the Hornets result against the boing-boings when I know I intended 2-0. Honesty and integrity moved me from 1st to 2nd.

We did get picks from LJ who is in the midst of busy season at work and he assures me he has been studying up to improve his position.  He also assures me that both the Hornets and the Reds will get a thrashing this week.

The theme for this week is the defence of each team.

The Cherries are fairly safe from the drop and Chelsea are fairly safe at the top.  I don’t see the Cherries even scoring unless David Luiz starts playing “silly buggers” again. I think that’s the language of Jack Rawlings being inherited.  RIP and not forgotten.

Palace managed to shock the Arse last week (Oh, Matron!) but despite Arsenal’s defensive failings they should have enough fire-power to overcome.

Everton are not in contention for Europe and Leicester are safe so the game is meaningless… except Lukaku wants to score to increase his value to the off-season suitors (and will) and Leicester are going to rest their players for the Champions League.  All of this is irrelevant as I am going to pick 1-1 for all Everton home games moving forward.

Citeh are out of the hunt for the league but still fighting for a Champions League spot.  Hull put four past a Middlesbrough team in the week and people will probably think that they will put one or two past a Citeh not known for protecting their goal;however, it will be a shut-out for the home team.  Aguero and Sane will be enough at the other end.

Burnley still haven’t won on the road this year so it’s incredible that they’re probably safe (3 points away!).  Boro usually play conservatively for a point but the end is nigh and on a weekend when they finally try and score to save their season but will Burnley end it with a loan counter past the bus?

Stoke V Liverpool
Liverpool are inconsistent and should win handily but this week I heard rumors that Stoke had hired equipment to simulate the Reds defense so they should be in with a good shout.  Only one player picked against the Scousers this week – LJ… not their greatest cheerleader.

Sunderland are down and Man Utd are undefeated in forever.   The Red Devils will not qualify for the CL through the league (they will finish outside the top 4) but they do have a route in via the Europa League.  I expect Jose to focus on that unimportant European trophy to save the season.
As someone once said: sometimes the best defence is a shit offence.

Between injuries and suspensions this may as well be Watford’s formation and Mazzari indicated as much in the week: ” we have no defence now” 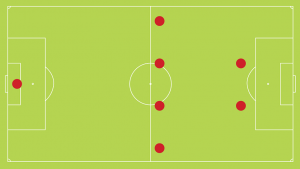 Meanwhile Spurs have the best defensive record and one of the top goalkeepers.

I will predict a hammering for the Hornets who are now safe.  I’ll be happy if I’m right and happy if I’m wrong.

West Brom got thumped last week by rampant Harry and his Hornets.  This week they take it out on Southampton and get a result.
A stout defence keeps them ahead.

Both teams are sinking.  Could be anyone’s game.