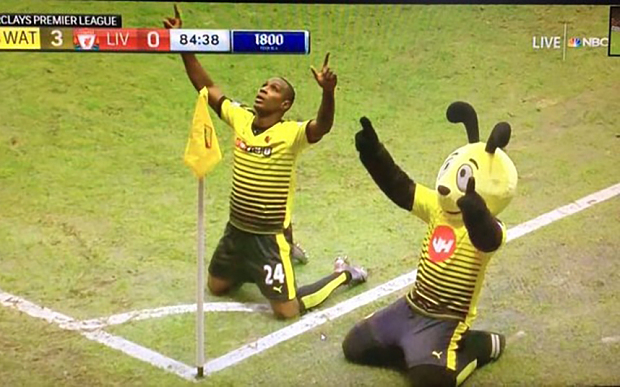 Not too much to write today because I’ve only had two days since the last set of picks to analyze and compute everything. My sophisticated algorithms take about 36 hours to program and 12 hours to run so I had to put in a few shortcuts which means the games were only simulated for 60 minutes of the 90. Due to the non-linear stochastic approach and the implementation of a recursive repeat loop feedback that accounts for potential injuries, cards, and pitch conditions I’m not even sure what 60 minutes were actually processed. As a result I have little confidence in the overall picks.

Crystal Palace are at home where the fans are loud and  proud to be from somewhere in London that’s not Chelsea.  Swansea will travel all the way from foreign lands.  Adds up to a home victory, no?

Everton really like to draw.  Stoke really like to prove me wrong.  Everton rested a couple of key players and Stoke used some energy against a sub-par Trafford team.  Would be a no-score bore draw but for the fact that Everton will score.

Norwich aren’t good but they score goals.  Aston Villa aren’t good.  At all.

Watford have garnered 4 points from Liverpool and Chelsea (which at the beginning of the year would have been two teams expected to be above them in the table).  Spuds are pretty good and actually are above them.  5 points from these three games would be a pretty decent return for the Moose men.

West Brom and Newcastle play in similar colors. My algorithm forgot to take into account that there are home and away strips for this reason.  I predicted 2 goals but I don’t know who for (someone in dark and white stripes).  I’m going to guess they were both West Brom.

Last weeks competition was in doubt until the final game (I had comfortable sewn up the win with a predicted 0-0 Everton result which was ruined by a 94th minute winner) but luckily no one predicted a 4-0 victory for Southampton.  Arsenal can score.  Bournemouth can score.  Arsenal will score more in a non-no-score-bore-draw.

The Hammers are sliding down and Southampton had a little bounce back up.  What goes up must come down and all that so West Ham must win.

Leicester lost to the Reds (not to be confused with Trafford United) but still found themselves top as Arsenal played like they always do when the word title appears next to their name in the media.  I just updated my algorithm for Arsenal to include analysis of the media to search for “Title” (negative coefficient impact) and “Campbell” (decrease in goal percentage opportunities).  To stop everything from running forever I decided to stop the media search for “Welbeck” as I did “Sturridge” as their were too many pseudo-hits returned.

Sunderland are rubbish but Liverpool will still only manage to win by one measly goal because.. well… because… who’s going to score for them?

Enjoy the Games.  I’ll be working.