Surprisingly, the results are following a trend pattern similar to the end of last year:  I’m getting more picks correct in terms of results but again failing to capitalize on the exact score bonus points leaving me mid-table, JE setting the pace, and BE continuing the slide backwards.

LJ who professes that those who know the most about football are destined to fail due to their propensity to over-think and over-analyze is once again proving that rule.

New players LS and AB put in a respectable showing and all in all it was a decent opening week with no standout poor and no standout great tallies.

So congrats to JE for a solid round and me for winning a category I just made up (most correct results).

A quick summary of some key events:

Chelsea had a disaster start losing two men and the game… I’m surprised they didn’t lose their keys.  For once, Diego Costa was not the talking point.

Newcastle had a losing start when their game featured Jonjo Shelvey return to his very best form and added to his philatelic collection. 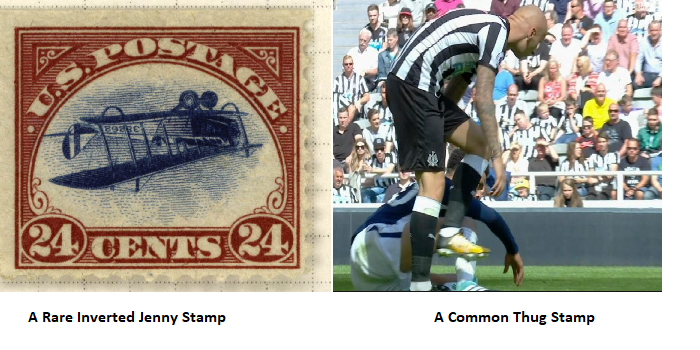 Manchester United were crowned Champions by the TV punditry and Lukaku and Matic co-players of the year.  This despite the fact that they beat a terrible West Ham team at home and two meaningless goals at the end don’t make a 4-0 result dominating.

Rooney went back to the team he supported as a young boy and scored.