It’s FA Cup week and every year it’s the first time where I think about the possibilities of a lower division team getting the chance to win something.  It’s an unrealistic view despite the fact that some over-aged pundit thinks the FA Cup has lost its luster and I thought I’d rid my life of him when all the competitions got bought by bigger networks.

Anyway, there is always the hope that Watford might go back… until they draw Chelsea away…. but they’re on the back of a bad loss to Spurs so maybe there’s hope? Nope, just like Watford will always lose to Everton no matter how much of his glove holds on to the ball.   Though apparently, the hairdos will be different…less curls and Peter Reid has started to dye his hair gray. 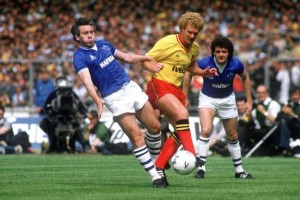 But there is always the potential upset.  Aston Villa, anyone?  They can’t score so who knows?  Will MK Dons be able to upset a bigger team in Liverpool?  It’s happened.

I’m not one that puts much stock in the match up.  Wimbledon were nowhere near as bad as anyone pretends now.  Dave Beasant was in peak form.  More relevant to now the only thing that the 3rd Round match has in common with the past is the name Liverpool and “Dons”.  I have no idea what “Dons” has to do with Milton Keynes at all.  It’s really about time they changed their name to something sensible like MK United, MK Villains… or what are they famous for.. MK Grids.
But I still think it’s unlikely a little team will win the Cup.  Five of the last Six have been taken by Chelsea, Arsenal, and Manchester City (who lost in the other final).   The big fish eat the little fish.. .but I’m still going for Spurs to get the glory of victory (if they can get past Burnley).
Well, here are the picks.