Unbelievable!  Shocking!  I can’t BELIEVE IT.

The dark cloud of Silva’s recent reign has also been lifted as he was booted from the team.  Most of the pundits don’t follow Watford (why would they) and would think that Watford have itchy trigger fingers but it was clear to the fans that he had to go.

The Pozzo family made the following comment regarding the release of Marco Silva.

“It was a kind of so-so love and I’m gonna make sure it never happens again..”

“As for me, well, I’ll find someone who’s not goin’ cheap in the sales”

For his part, Marco Silva did not have much to say as he was determined to quickly drive over towards Stanley Park to see if there were any openings in the Northwest of England as this was a location he dearly wanted to move to only a few months ago.  When asked what he said to the Pozzo family he said it was mostly coming to a mutual understanding. He apparently said:

“I don’t belong to you, you see, And take a look in my face, for the last time,
I never knew you, you never knew me”

A random song to enjoy this week.

Newcastle looked promising but have yet to win. Arsenal are as inconsistent as you can be in three games L-W-D which is particularly surprising as most of the Summer talk has been about how Arsene has not changed the team formation or look.  Arsenal still have quality in all positions and it’s probably about time that the Ox gets let loose again.  Arsenal will dominate one half and score 2 Newcastle will take over the other half and keep it interesting.

Aston Villa have been better than their record and Sunderland are a rather poor looking outfit and I expect their bad run of form to continue because if I know one thing, it’s that Tactics Time can even coach a team to victory against a team that is giving up.  Poor old Mr Advocaat should have retired. 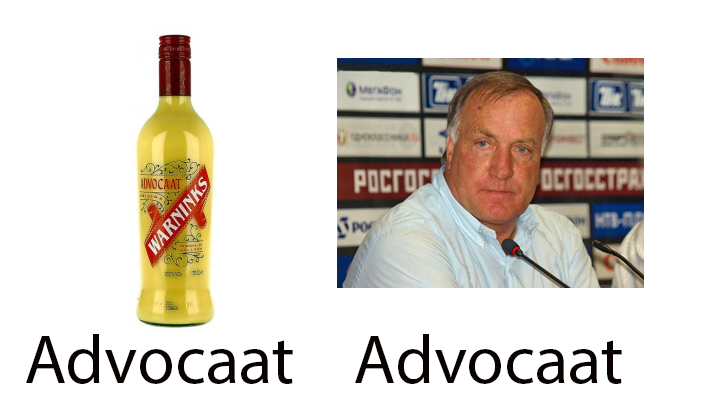 Bournemouth have kicked off well and are putting in goals.  The Walkers Crisps outfit have also been over-achieving (according to me) under the crazy coach so it should be a thriller and what small crowd can fit in that teensy stadium should be all excited.

It appears that Chelsea have been playing with 10 men to make the games more even.  I’m going to go out on a limb and say that the Great One has threatened anyone who gets sent off with being sent into exile at the New York team to play with Fat Frank.  Sure, it’s a London derby and anything can happen but when one side is Chelsea and one is Crystal Palace it’s too one side for the rivalry to make a difference.  Costa gets sent off.

Liverpool will keep another clean sheet through a great defensive display.  The back four and Mignolet will keep everything tight and in control while West Ham waste all of their chances through ineptitude up front.  Sakho will not hit the netto.  I think Jordan Henderson the captain is out injured but I doubt that will hurt Liverpool much.  I was told to write down Firminho’s name so here we are and I’m going to write it down.  Firminho.  I hope he scores or something or it’s going to feel like a waste of time !

Manchester City are top of the table.  Even Quique Flores says Aguero is the best striker in the league so what hope do we have?   Sterling looks upbeat and better than Milner who at Liverpool is, ironically, probably better than Sterling.  Sami “whyamisounderappreciated” Nasri will come on and score to prove some point about being i the team late on after YaYa proves that this year he’s back on form by slotting in Aguero who thumps the ball so hard the ball threatens to break the net.

Here’s Quique – is is just me that thinks he looks like the love child of House and Clint Dempsey.

And now the quick finish.

Stoke will win because they are playing West Brom who have a striker that basically doesn’t want to be there.

Tottenham finally manage to win a game they should win and Martinez gets to again be in “next fired coach” discussions alongside the eggy dutch drink mentioned previously.  Southampton have lost something from last year (mostly players) and they will do well enough against the Canaries who don’t look too bad.

Man United are coming off a hattrick and I’m convinced that he’s one who uses up his goal count on unneeded goals.  Sure, he scored in the week but he should have saved one for the Swansea match.  Swansea are a decent team and the young manager has them playing well.  It’s nice to see the Reds lose.

Off to look for a new theme…and start the migration project.

… that I almost didn’t notice that Manchester Citeh will be going into the Old Toilet looking up at the team from “almost Manchester”.   What has happened to a team full of aging stars that want to leave, aren’t any good, or just don’t have the class of younger talent, backed with the most overrated goalkeeper in the league?   One would think that with all they’ve spent they would be giving James Boring Milner away.  They should be begging him to stay like they did Frank Lampard for the last few months.  With financial fair play it’s hard to know what Citeh are going to do to rebuild.  They can offload players at a loss and start again – or can they?  What a mess.  Worst defense of the title since Leeds back in 1992-3 – if that counts as a Premier League defense.

But what about them Eagles?  Looks like Pardew should be manager of the year for keeping the inept Newcastle and Crystal Palace up in the same year!   Of course some say that this win was because Citeh confused their shirts for Barcelona and gave up before the game even started.

Perhaps next year they can look for a new manager  current odds are:

Leicester City must be gutted this week to final win and then see the three teams above them win.  Well this day they have some luck because some of their competition for last are playing each other.   It’s hard to go for QPR away but I’ve been insistent that Villa will go down since week 1 and that’s the only prediction I made that will come true*

*It should be noted that I actually had Chelsea to win the title but I hate Mourinho so much I couldn’t even bear to put them top so I put them down lower.   This year is practice for next year anyway – I’m developing formula for predictology that I will institute next year to get my prediction percentage up to around something better than crap (which is where I am right now).

Dubbed the Lionel Messi of the old 2nd Division, Forestieri is a great player that has been on loan to Watford.

We have suffered our share of bad decisions.  Many against the top teams so not-quite-evening-out-over-the-course-of-the-season but that doesn’t excuse the dive of the year.

In further news, things are ridiculously close but I’m glad we’re in the mix.

Where did Brentford come from?

So December 12th, Elton John is in the house and it’s all because of a new stand.  He paid for a lot of the Rouse stand which they renamed the Graham Taylor stand…and now he gets his own stand.  I’m fairly sure when he visits he gets a better seat though.

Let’s hope he gets to see a Wigan game that reminds us of the recent Fulham beat-down. 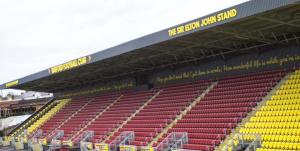 So, for those that are interested, this is the new layout. 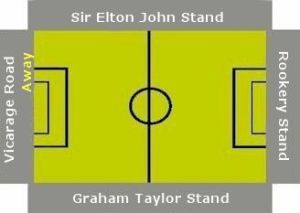 Well it was the FA Cup draw this week and lo and behold it went really well for teams that in the former first division that enjoy the thrills and spills of a long cup run.    Here’s to you Watford… a gift in the first real round… a trip to Chelsea.  Not only is it Chelsea, it’s likely to be a Chelsea actually interested in winning every trophy there is to win.

On the bright side, there are those that will say that a loss early in the cup will allow the team to focus on the Championship and a promotion push.  That sounds good in principle but that’s just a way to placate losers.  The other member of my household has a little thing for Sheffield Wednesday and the Citeh – so that’s one team into the round of 4th.

Arsenal vs Hull is interesting because it’s a repeat of last year’s final but then it’s Hull so that’s about as interesting as it gets.

With Liverpool struggling an away game to Wimbledon will invoke thought’s of Lawrie Sanchez (though strict lineage makes it a different team). 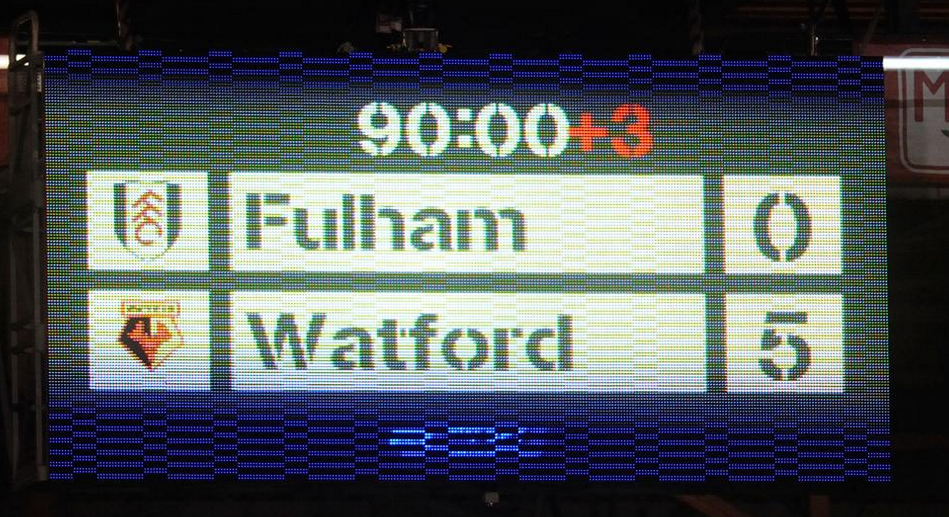 A win away from home. Check.
A clean sheet. Check.
Dominant victory. Check.

Good Day to Be a Fan

Watford are averaging six points per manager this year.  Normally that sounds bad… but this year it puts us top! 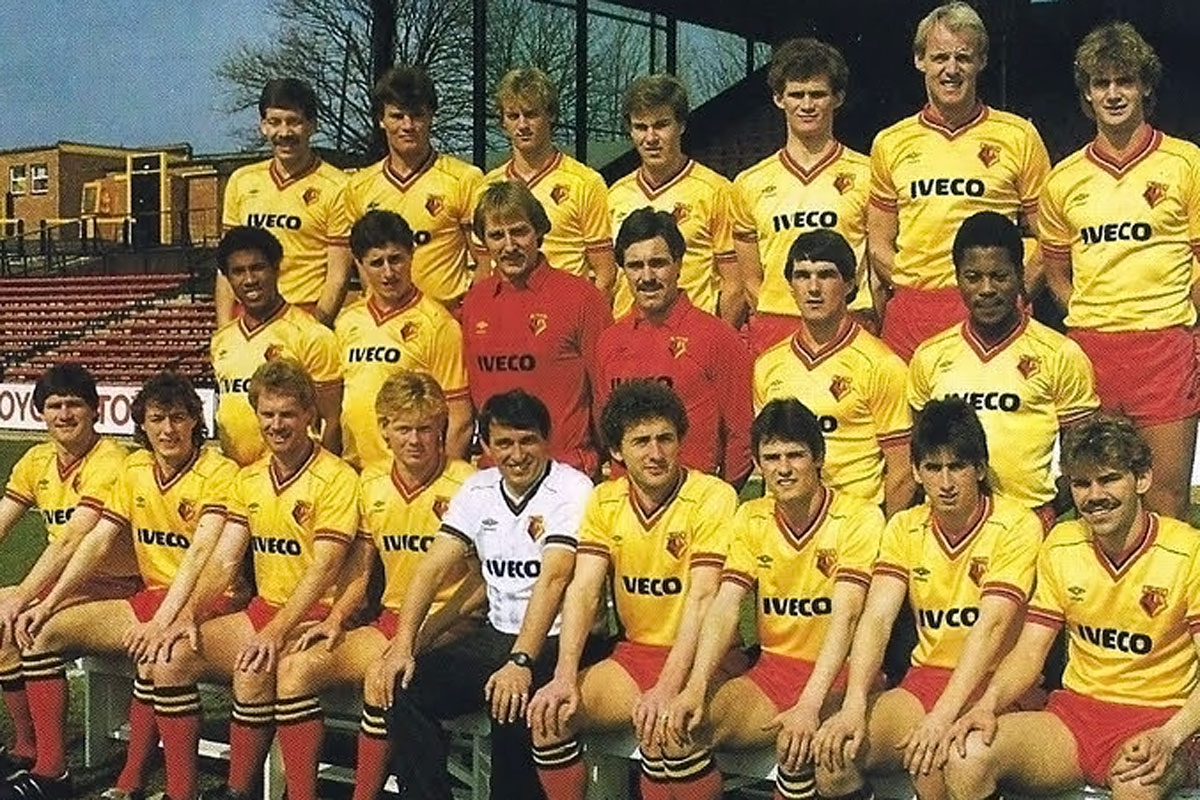 Look at Mo Johnstone!  He looks 15!  My claim to fame is adding him to the Watford wikipedia page.
Recognize Wilf, Nigel, Johnny B, Sherwood, Kenny, but some of these players have faded to the land of memories past.

Thank god the short shorts era came to an end. 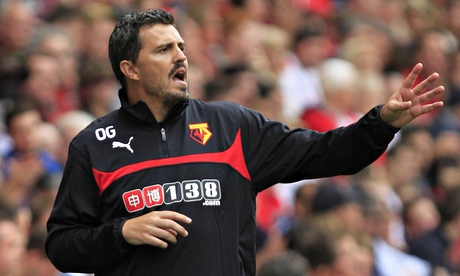 In a bizarre beginning of the season, Watford’s old manager quit after taking the team as far as he could (that was 2 wins, apparently) !

So bring on the Continental replacement Oscar Garcia! 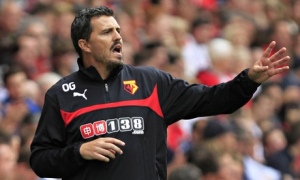 Turns out that a single game, a 1-0 loss to Charlton, was enough to send him to the hospital with chest pains.  Are we that bad?

In all seriousness, get well soon, we kind of like having someone steering the wandering ship.

I admit it – I liked Almunia.

Now he’s finally retiring after a discovery that he had a dodgy ticker.

Thanks for the Penalty Save against Leicester !